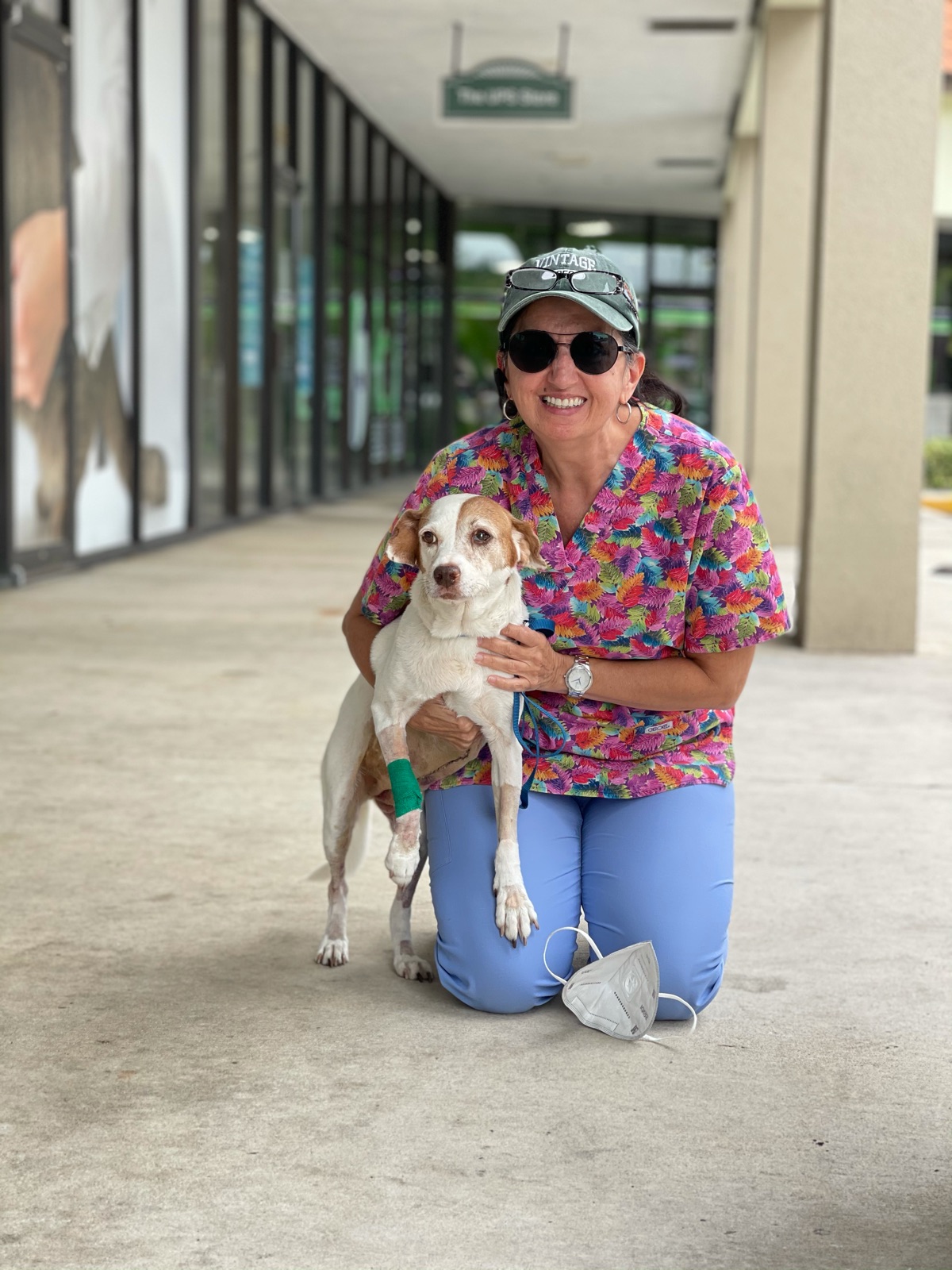 “Something was off,” Lucy explains when she first noticed Candy was not feeling great. “She had a cut on her leg that wasn’t healing and she wasn’t eating well. She was looking tired and maybe depressed,” she adds. Lucy took Candy to her family veterinarian. Blood work revealed Candy had anaplasma (a tick born illness that can infect blood cells and can cause platelet depletion) The veterinarian also found heartworms, along with liver and gall bladder problems.

“My veterinarian told me to go right away to Advanced Veterinary Care Center,” says Lucy. “They said that’s where I needed to be.” Lucy met with AVCC Co-Medical Director, Dr. Jon Rappaport. An ultrasound revealed Candy had severe inflammatory disease of the gall bladder. Candy was also suffering from thrombocytopenia (a condition characterized by abnormally low levels of platelets). Surgery was necessary, but risky, as bleeding would be a big concern. Her chance of survival would be 30% to 50% at best. “I was sobbing,” says Lucy. “She needed emergency surgery or she would not make it.”

AVCC’s board certified Director of Surgery, Dr. Shiara Arulpragasam removed the gall bladder, which was severely infected and already starting to rupture. Candy’s care also required plasma transfusions and red blood cells. After surgery, Candy remained in critical care. She was treated for several concurrent and complicating issues including: infection in the liver, Heartworm, microfilaria (circulating Heartworm larvae), and anaplasma. The severe depletion in her platelet numbers caused bleeding and bruising. She had rising liver enzymes, elevated heart rate, fever and more. Medically, these problems could not all be resolved at the same time.

“She made it through surgery and she was having a rough time in recovery. We we were not sure if she was going to make it through the night,” says Lucy in tears, recalling what she described as an emotional rollercoaster. But, I couldn’t say more wonderful things about all the doctors and nurses at AVCC. They were always willing to explain things and listen to me. They said they would not give up on Candy. And, Candy did not give up either. Dr. Rappaport took Candy under his wing. He’s so gentle and so caring. I have incredible praise for him. They are all my heroes!”

During recovery, Lucy made a two hour round trip from Homestead each day to spend time with Candy. “She lost her appetite and she coughed out her feeding tube,” says Lucy. “So I would go every day and syringe feed her pureed baby food. For me, it was like a part time job, but it was definitely worth the drive. I knew AVCC was going to be her only chance!”

Candy spent about two weeks in the hospital. But, after about one week of being home, Candy was not well. It turns out, one of her sutures (while still in place) had come slightly loose and a small amount of bile was leaking from the suture site. Another emergency surgery was needed and Dr. Arulpragasam was able to identify and re-suture the area. Candy recovered from the second surgery with both her liver numbers and appetite improving.

Today, Candy is doing “really well” according to Lucy. “Her liver is still functioning well and fully. She has gained weight. She’s happy and bossy,” Lucy adds laughing. As for the care Candy received at Advanced Veterinary Care Center, Lucy could not be happier! “It’s an amazing place. I have nothing but the utmost respect and admiration for everyone there.”