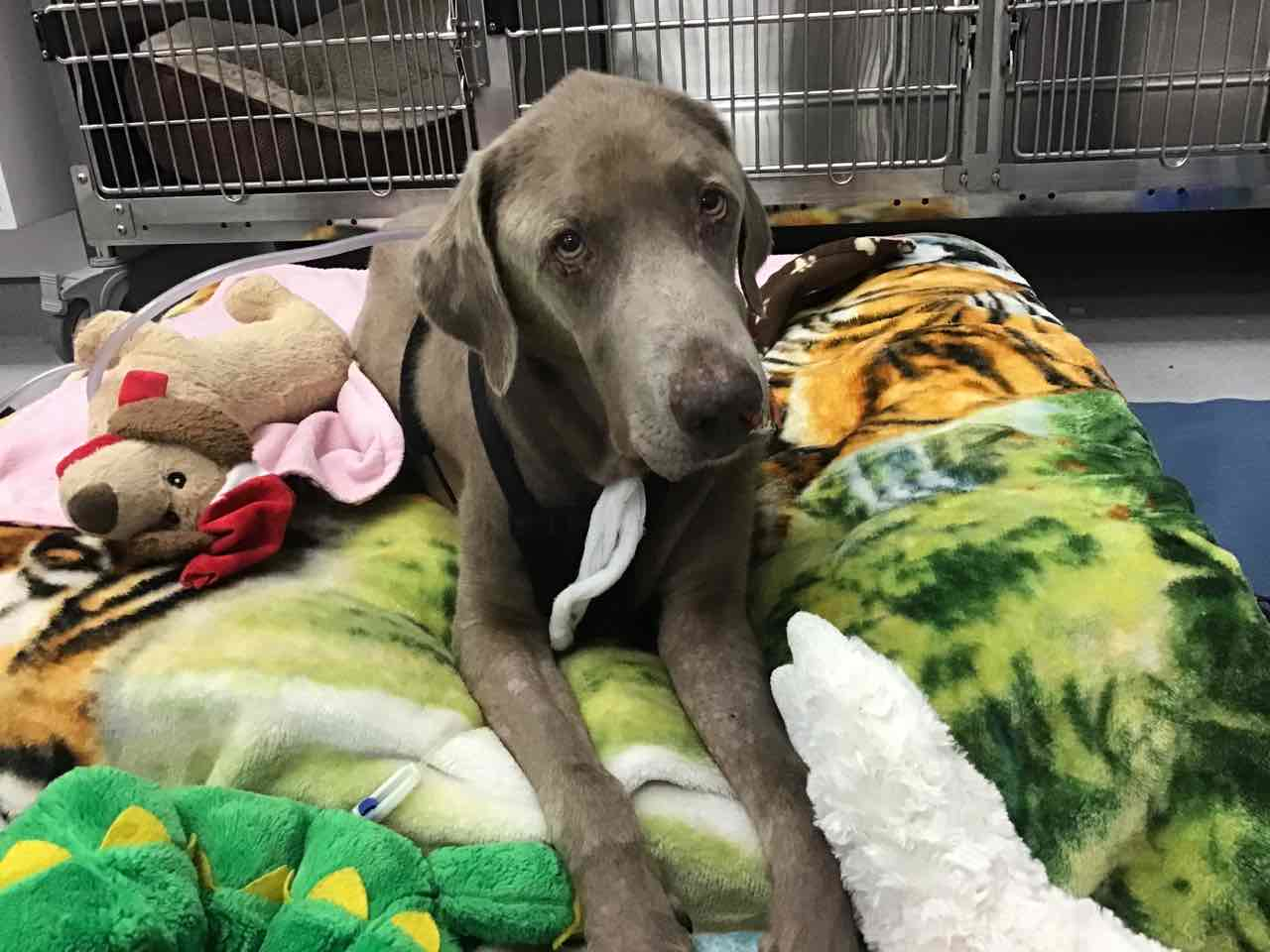 “He was in a hunched position, groaning, gagging and panting pretty heavy,” recalls pet dad Brian Schafler. It soon became clear that Brian’s dog Tyson, a 9-year-old lab, was having an emergency. “We let him outside and he walked away from us. He never does that,” adds Brian. “Then we could see signs that his abdomen was larger than usual.” Brian’s family veterinarian told him to go right away to Advanced Veterinary Care Center (AVCC) in Davie. “He said if AVCC can’t save him, then no one else can!”

Brian and his wife rushed Tyson to AVCC. “We called on the way and the staff started to pre-admit him, which I really liked. It was like a 911 dispatch. They had his signs and symptoms prior to arriving. As soon as we walked in and within seconds they had us in a room.”

Brian learned that Tyson was suffering from Gastric Dilatation-Volvulus (GDV) a life-threatening condition where pressure in the stomach increases, with no relief and the stomach rotates within the abdomen. Dogs with GDV can die within hours. “It was a quick decision to say yes to surgery or he was going to die,” recalls Brian. “They went over the risk factors, the success rate; they helped us understand everything!”

Tyson was taken to surgery and his stomach was untwisted and sutured to his body wall in a procedure called gastropexy. This prevents the stomach from turning again in the future. A number of blood vessels were torn from the spleen when the stomach rotated. That caused an abdominal hemorrhage (hemopetironeum), which required removal of Tyson’s spleen to stop the bleeding.

Tyson recovered well from his emergency surgery at AVCC. “Afterwards, he was back to his normal self,” says Brian. “His appetite was great! He was eating, swimming and bringing me my shoes!”

Pet owners may find many tips online to help prevent GDV, including how to feed your dog, when to exercise your dog, etc. But, the only way to truly prevent GDV is to elect to have the gastropexy procedure performed, before a problem occurs. Brian agrees. “We had come back from a normal walk with Tyson that night. It was the same routine we always had; fed in the same bowl, at the same height, same amount of food, same timeframe and same type of walk. So, that can happen to any large breed, deep chested dog at any time. If I wasn’t home for a few hours and that happened, Tyson would have been dead. I would elect for gastropexy if I get another dog. It’s better to be safe than sorry, especially if you can prevent that.”

Just a few months after Tyson’s surgery, another unrelated emergency arose. “We took Tyson for a walk. It was a Friday night. Everything happens on a Friday night,” notes Brian. “Tyson was panting and trying to throw up. He was restless.” Brian went right to Advanced Veterinary Care Center, knowing AVCC is open 24 hours a day, 7 days a week. He learned Tyson’s temperature was 105 degrees. Normal temperatures for dogs range from 100 to 102.5 degrees.

Dr. Jon Rappaport, Co-Medical Director of AVCC began some tests. “Dr. Rappaport was very transparent and performed the procedure in front of us, which I appreciated,” says Brian. “He showed us this black fluid (on ultrasound) outside of Tyson’s stomach area. Tyson was septic and dying by the minute.”

With a 50% survival rate, Tyson underwent surgery to discover the source of the problem. Cysts had grown on Tyson’s prostate as a result of not being neutered. “The testosterone built up in these cysts and they had broken open, causing his body to shut down,” adds Brian. All male dogs are at risk for prostatitis and pet owners can talk to their family veterinarian about the benefits of neutering non-breeding male dogs to prevent prostatitis and testicular cancers.

Tyson had a long road to recover from his septic peritonitis and ruptured prostatic abscess. But Brian and the doctors and staff at AVCC never gave up. “Everyday would be a new complication but they would really dedicate to him,” says Brian gratefully. “They wanted to do their job and give him hope to live. They allow visitors just like a regular hospital. I would get there in the morning and spend a few hours with him and then again in the evening. My friends who came to visit Tyson would text me later about how impressed they were by AVCC.” 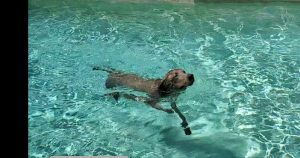 Today, Tyson is slowly getting his stamina back and doing what he loves best; taking long walks around the neighborhood and swimming. Brian, who is the owner of Supplement Warehouse in Davie, tells his friends, family and clients about AVCC every chance he gets. “I’m a business owner for 25 years. I pay attention to everything. I see how the staff respects one another at AVCC.” Brian also talks about Dr. Rappaport making calls to help him find convenient medication for Tyson, Dr. McLaughlin bringing him rotisserie chicken for Tyson and the nursing staff giving him a soothing pat and cold bottled water. “They have everything you want in a hospital. They are on point from cleaning, to how they monitor to check in on the animals. Everything is run perfect. They are the most advanced, state of the art hospital and they go above and beyond what a hospital should be like. If something goes wrong with your pet, if AVCC can’t help, then no one else can. They are 100% passionate and compassionate.” 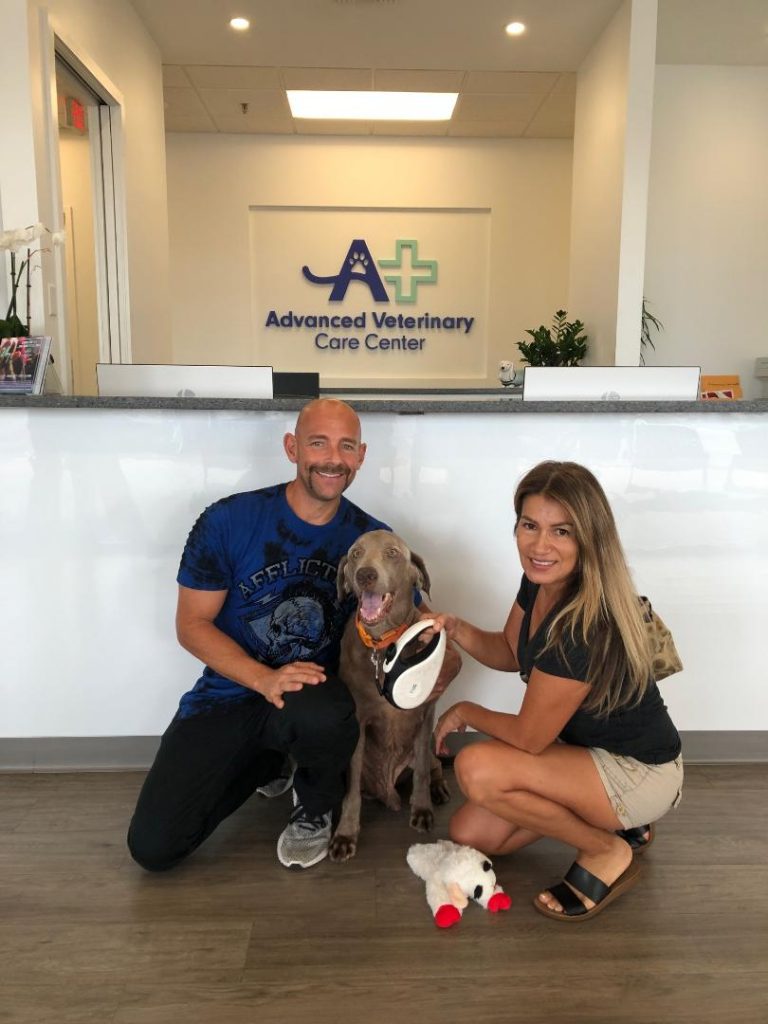