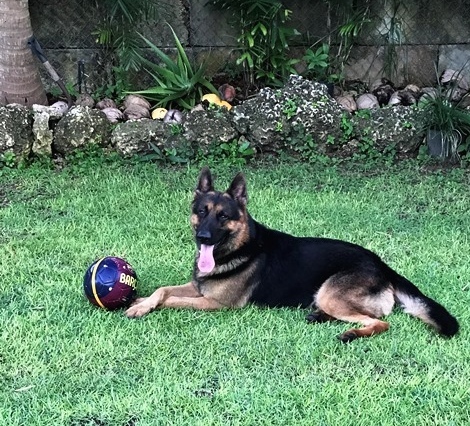 7 Things to Know Right Now About Leptospirosis in South Florida

“He came up to me and I noticed he was yellow. His eyeballs were yellow. His entire body was yellow,” recalls pet owner Steve Norrito. That’s when Steve knew for sure, something was very wrong with his dog Max. In the days prior, the sweet German Shepherd, who Steve calls “a hyper dog” just wasn’t acting like himself.

Steve’s family veterinarian ran tests, prescribed medication and then referred him to Advanced Veterinary Care Center in Davie. It was an hour drive for Steve, who lives in Homestead. “I knew nothing, other than AVCC could handle this issue,” says Steve. “When I arrived, the office was outstanding; the setup, the cleanliness and the people. It was nothing like I’d experienced before,” he adds.

Max was hospitalized at AVCC for kidney disease and liver failure, the result of contracting bacteria called leptospirosis. Leptospirosis is an extremely severe bacterial infection that can affect many organ systems.

Here are 7 things all pet owners should know right now about leptospirosis!

1. How animals get infected: “The most common way that animals become infected with leptospirosis, is contact with infected urine from other wildlife, such as rodents,” says AVCC’s Director of Emergency and Critical Care, Dr. Chris McLaughlin.  “They ingest the urine either intentionally from puddles or other collections of water, or from grooming the infected urine off of their fur, resulting in infection,” he adds. The bacteria can enter a dog’s body through their mucus membranes such as the eyes, nose, mouth and even through cuts on their skin.

2. There’s an increase in leptospirosis infections in South Florida.“We are seeing an increase in the number of leptospirosis cases we are diagnosing,” says Dr. McLaughlin.  Max’s owner Steve notes that other dogs in his area and even a human neighbor had contracted the disease before Max. “We are testing for it more frequently because of the larger number of cases we have been seeing,” adds Dr. McLaughlin.

3. This infection is contagious to other animals and humans! “It is very important for owners to know that leptospirosis is zoonotic, which means the bacteria can be passed on from the pet to the pet owner, especially through contact with infected urine,” cautions Dr. McLaughlin.  “Leptospirosis is a very serious illness in people, just like it is in pets, and so preventing infection in owners is very important.  Anyone who has a pet that has been diagnosed with leptospirosis should speak to their family doctor if they have any concerning signs or symptoms, as this infection needs to be caught early.”

5. Leptospirosis can be found anywhere, even in your own backyard! “We really see leptospirosis everywhere, regardless of the environment,” warns Dr. McLaughlin.  “Animals who may be at a higher risk include those who spend a large amount of time in nature, especially in wet environments, particularly dogs who participate in hiking or camping and may be drinking out of puddles.”

6. Leptospirosis affects dogs more than cats. “Leptospirosis is more of a dog issue for a couple of reasons,” says Dr. McLaughlin. “First, cats are less likely to be outside and coming into contact with infected urine.  Second, it has been theorized that cats are more resistant to infection with this bacteria than dogs, and so they are less likely to become clinically ill if they are exposed.

7. Leptospirosis can be prevented! “While no vaccine is 100% effective, there is a vaccination available for leptospirosis that is very effective at preventing infection,” urges Dr. McLaughlin. “This vaccination should be considered for all dogs at risk of exposure to the bacteria.“

Max’s care, like many pets with leptospirosis required prolonged hospitalization with IV fluids, antibiotics, a feeding tube for assisted feedings, and extensive supportive care.  Steve was thankful his family veterinarian referred him to Advanced Veterinary Care Center. “The service I got from Dr. McLaughlin and Dr. Rappaport, as well as the calls and the follow up was impeccable,” says Steve. “They are very clear and they told me what to expect, or what could happen.”

“Max has made a 100% turnaround,” says Steve happily. “He’s back to himself, and enjoying playing fetch with basketballs, volleyballs and Frisbees.” As for the drive from Steve’s hometown of Homestead to Davie, “It’s worth the drive,” exclaims Steve. “It’s worth everything! I’ve been spreading the word to everyone. As soon as you walk in the door, everyone at AVCC knows exactly what they are doing. I truly entrusted them.”