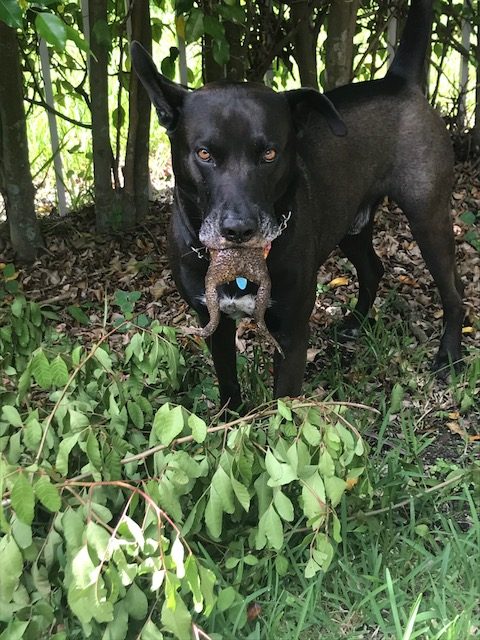 “He was literally dying on the way to the hospital,” recalls Nina as she rushed her 6-year-old dog Koda to Advanced Veterinary Care Center (AVCC) in Davie. “He was making these awful sounds that I’d never heard and as soon as we got to AVCC, he dropped. I didn’t see that he was alive,” she adds.

Just moments before, Koda, a 74-pound black lab mix, was in Nina’s backyard with a toad in his mouth. Nina snapped the above photo of Koda with the toad and then two minutes later, she noticed something was wrong. “He started walking to me funny. He was limping and when he reached me, he dropped to the ground.”

The toad, commonly known as Bufo, Giant Toad or Cane Toad is a non-native species. When it gets handled or feels threatened, it secretes a highly toxic substance that can be deadly to pets. “Bufo Toad exposure is probably one of the most common emergencies we see at AVCC, sometimes with multiple cases per shift,” according to Dr. Chris McLaughlin, Director of Emergency and Critical Care at AVCC.  “In order to become intoxicated by a Bufo Toad, the toxin from their parotid glands (glands behind the eyes/ears) needs to come in contact with the mucus membranes of the pet.  This most commonly happens when a pet picks the toad up in their mouth and is a defense mechanism for the toad,” adds Dr. McLaughlin.

Nina was thrilled with the immediate attention she received at AVCC. “Everyone was wonderful,” she said. “We called them as we were on the way and they explained exactly where they are located. The technicians were waiting for us and helped carry Koda inside. I thought for sure the doctor would be coming out to give me bad news,” she adds.

“I’m so grateful that Dr. Toll and his excellent team of technicians, and front office staff were so diligent, professional, and compassionate. Dr. Toll was also very friendly and down to earth. He let me see Koda in the back room and went over everything that needed to be done that day. He was very accessible and he would always call and give me updates.”

It took a few days to fully recover, but Koda was soon back to his old self; this time chasing lizards instead of toads. Nina was so thankful she found AVCC, when minutes mattered, on that terrifying day. “Everyone there is great! They went above and beyond to save my beloved dog.”

If a pet owner sees their pet lick or even pick up a toad in their mouth, what are the immediate steps they should take?

The biggest step that can be taken to reduce the dose of toxin that a pet ingests is to wipe out the mouth and gums with a clean wet cloth.  One of the biggest mistakes we see people make is that they try and hose out their pets’ mouths.  Because Bufo Toad intoxication results in tremors/seizures and other neurological signs, it is very unsafe to hose water directly into a pets’ mouth, because they may not be able to protect their airway and they may aspirate the water.  A good wipe with a clean wet cloth should remove some of the toxin.

What if a pet is outside without their owner?  What are the signs that your pet has come in contact with a Bufo Toad?

Is there anything else you think would be important for pet owners to know?

​In South Florida, pets should always be taken out on a leash, not allowed unsupervised free reign of a yard, especially on wet evenings.  When it’s dark, using a flashlight to look for toads around your yard may also help you to prevent your dog from getting exposed.  It is also important to note that there are many safe toads that are native species in South Florida so you should not kill any and all toads you find on your property.  Bufo Toads are an invasive species that have been introduced to South Florida and they compete with the native toad species.

For more on the Bufo Toad, including photos, visit: