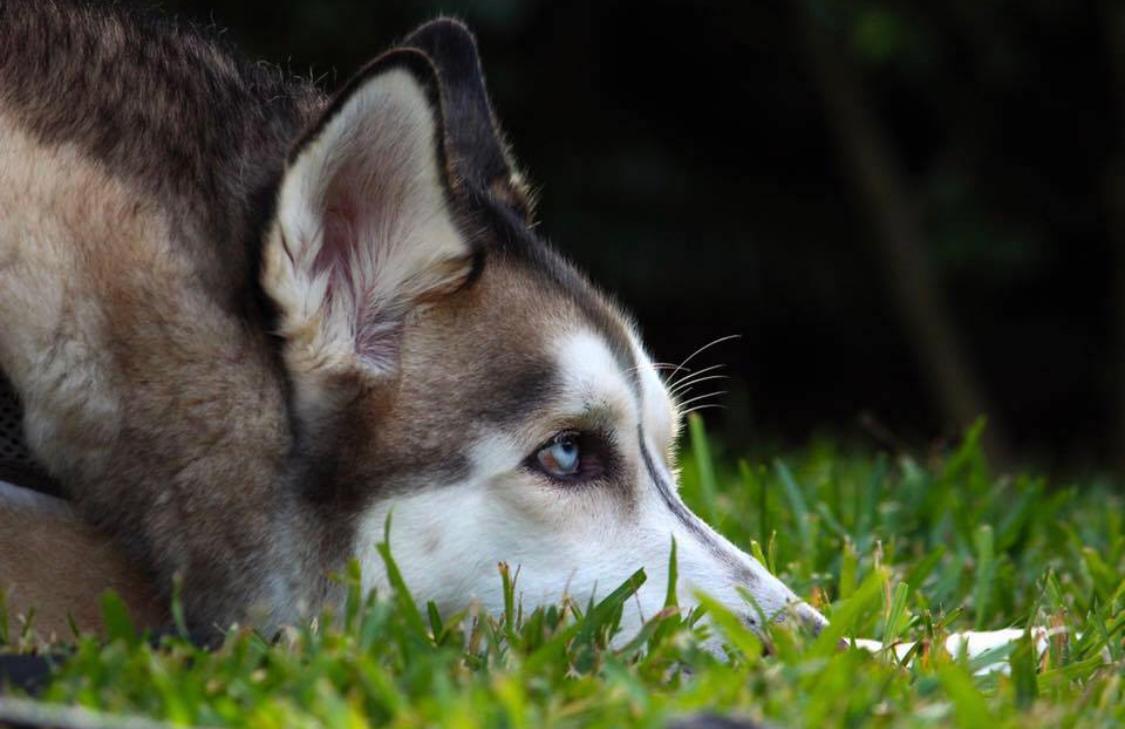 “He was moments from passing away,” recalls Mary Moreno. Mary had gotten a call that her granddog Riley, a sweet Siberian Husky, wasn’t acting right. “My son’s girlfriend was working from home.  She noticed Riley rubbing on her leg and then he would disappear,” says Mary. “It just wasn’t normal. Riley had gone to the bedroom and was curled up in the corner breathing erratically.” Mary went to her son Alex’s house to help with Riley. After a chest x-ray at the local veterinarian, Mary was told to go right away to Advanced Veterinary Care Center in Davie.

Within minutes of arriving at AVCC, doctors reviewed the x-ray and diagnosed Riley with spontaneous pneumothorax. Pneumothorax is a condition in which air accumulates in the thoracic cavity in the space between the lung and the chest wall. Accumulation of air in this space causes the lungs to collapse making it difficult or impossible to breathe. Pneumothorax can be secondary to trauma such as being hit by a car or in some rare cases it can be spontaneous. Spontaneous pneumothorax occurs when a portion of the lung is abnormal (with no history of trauma or penetrating wound) and there is a rupture of the lung, leading to air escaping.

“One of Riley’s lungs had completely collapsed and the other one was beginning to collapse,” says Mary. Spontaneous pneumothorax is most commonly seen in Arctic dog breeds such as the Siberian Husky. Riley had bullae (or thin walled air-filled cavities) on the surface of his lungs and these bullae were breaking and letting the air escape into his chest cavity.

“The doctors and nurses went through all the options with me,” recalls Mary. “I just knew from the moment I walked in, they had my back!” After a chest tube was placed to alleviate some of the air, Riley underwent major surgery.  This included a median sternotomy (opening of the chest cavity on midline to permit complete evaluation of all the lung tissue). In surgery, Riley was found to have multiple bullae on two lung lobes. Dogs have six lung lobes (two on the left and four on the right).  Riley had to have two of his right lung lobes removed.

“The quality of care of the surgeons and all of their info. was right on point.  They also called me when key moments happened,” says Mary gratefully. “The front desk staff was just as good! They helped me get financial assistance and while Riley was recovering, they also brought him into the front office so that he wouldn’t be alone. It brings a tear to my eye, how sweet they all were! The ladies were so wonderful and the doctors were outstanding. I can’t say enough about how well they took care of him. We’re so grateful!”

Today, Riley is back to 100%! He plays, runs and, “he jumps right over my nice white couch,” says Mary laughing. “If any one of our circumstances had been different, we don’t know what would have happened with Riley. At the end of the day, this was better than our expectations!”