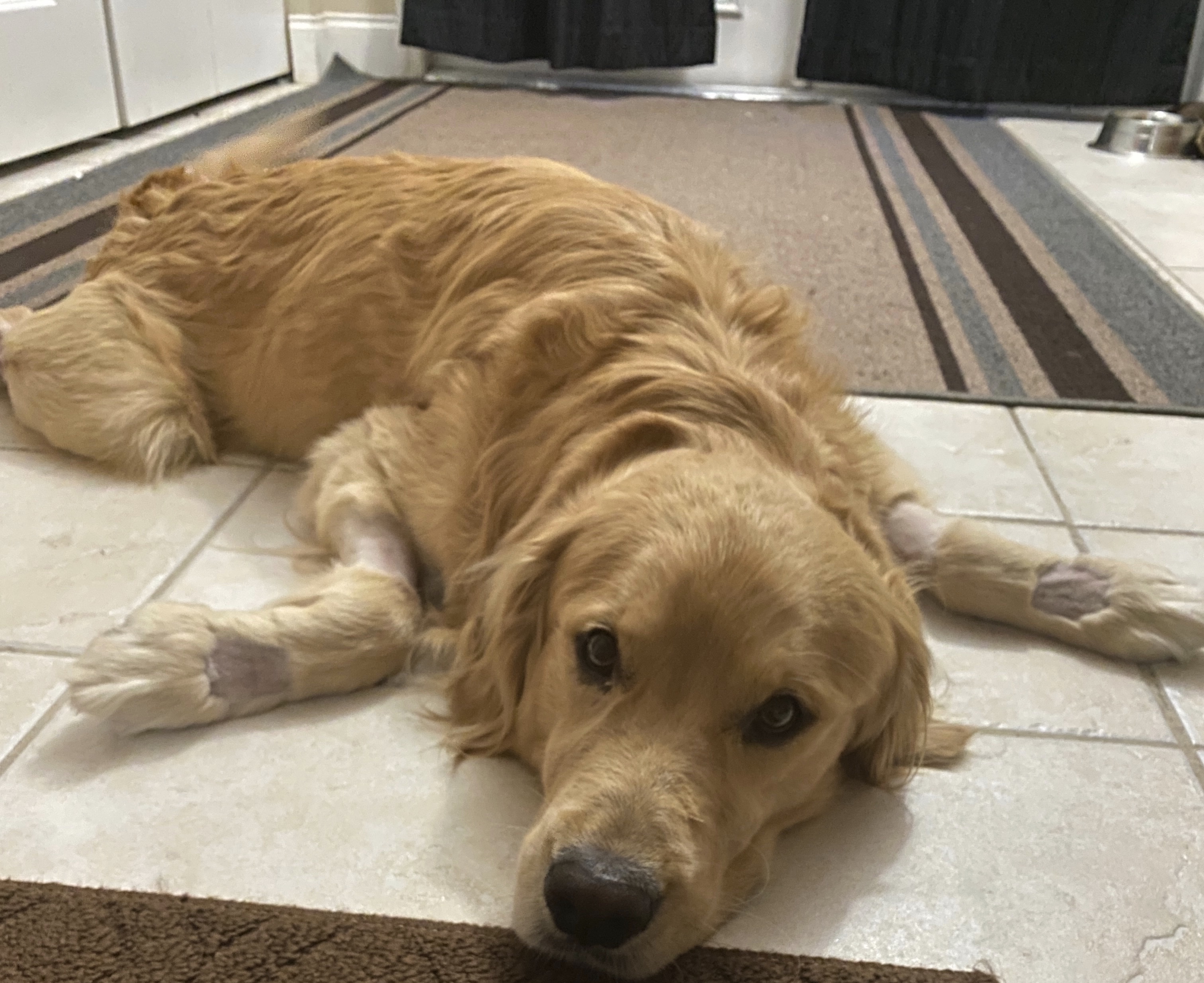 “He had lost his vision and complete movement in his body. His brain was swollen and his internal temperature was high,” recalls Denisse and Marcus of their golden retriever Buddy, after they rushed him to Advanced Veterinary Care Center in Davie this month.

As in any other typical day in South Florida, Denisse and Marcus started their morning by walking two-year-old Buddy, along with his pit bull brother Jax, to the dog park in their neighborhood. It was 10 a.m. and the park had plenty of shade. The furry boys played while Denisse and Marcus provided water. “Buddy was being himself and didn’t really want to leave,” recalls Denisse.

It wasn’t until the walk home, that Buddy began showing signs of distress. “We got close to home and Buddy laid down in the grass and wouldn’t move. He would stand up and fall back over and stumble,” says Denisse. So, the couple ran to get the car for Buddy. “When we put him in the car, he wouldn’t move at all,” Denisse adds.

“We ran inside and turned on the hose and sprayed him down to get his body as cool as possible and brought him inside to the air conditioning. He wasn’t responding well. We would say his name and he wouldn’t move much.”

Denisse and Marcus rushed Buddy to Advanced Veterinary Care Center, which was very close to home. It was Labor Day, but the specialty and emergency veterinary hospital is open 24 hours a day, 7 days a week. “From the time we noticed he was acting weird and we cooled him down, it was only about 20 minutes by the time we got to the hospital,” adds Denisse. “Within 30 seconds of our arrival there was someone outside. They came with a gurney and took Buddy in to instantly start working on him.”

When Buddy arrived at AVCC, he had systems one, two and three affected. His prognosis during those first hours was only a 50% chance of survival. He was treated with i.v. fluids, medication to reduce swelling in the brain, fresh frozen plasma to replace depleted clotting factors, gastrointestinal protectant medications, and pain medication. He was hospitalized for two days. The first night, “he began to start seeing shadows,” says Denisse, “and, he started wagging his tail. The next day he had his vision back,” adds Denise, “but he still had blood clotting issues and wasn’t eating.”

“Heatstroke appears to be more common in the brachycephalic (pushed in nose) breeds, and also in Labrador and golden retrievers,” according to AVCC Co-Medical Director, Dr. Jon Rappaport. “Being left in a hot vehicle, exercise in the sun and heat, and limited access to fresh water appear to be associated with heatstroke,” he adds. “Dogs don’t sweat and cool like we do. We cool as our perspiration evaporates. Dogs have very few sweat glands; mostly in the feet. They cool by evaporating moisture over their tongues and panting. Any dog whose physical features compromise this (brachycephalic airway changes, obesity, laryngeal disease, being out of shape) are at higher risk. They can overheat by playing too much, too hard, and in the heat.”

Some dogs may not have those compromised issues, but still cannot cool their excessive heat, as was likely the case with Buddy. Denise says Buddy and his brother Jax have been to that dog park plenty of times before, on even hotter days and in the afternoon. “We would have never expected this to happen,” says Denisse.

“What made the difference in Buddy’s survival was the quick action of Denisse and Marcus to work to cool him at home as soon as they recognized a problem,” says Dr. Rappaport. “Buddy was on the brink of no return. Any more over the edge and he would have been lost.”

Today, Buddy is back his old self, according to Denisse, who is very thankful they found Advanced Veterinary Care Center open that holiday morning. “They were amazing,” exclaims Denisse. “They called us and they let us call them a million times to get nurse updates. We called about seven or eight times a day. And as soon as we called, they would get a nurse and get us an update. They even sent a picture the night we left him there. They are great people!”